Independence through skills training –
​ The Story of Mr. Anil 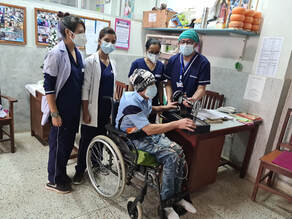 The idea of vocational training had been floating in my head ever since I started working at United Mission Hospital Tansen in May 2019. UMH Tansen is a large, regional acute care hospital in the middle hills of the Himalayas, about 300km (or one day’s drive) from Kathmandu. It offers a myriad of services including maternal, surgical, orthopedic and burns care. It serves a large catchment from the surrounding nine districts, Western Nepal as well as parts of North India. Almost 10 years ago, the hospital expanded to include a Neuro Rehab unit, which NepalAbiity has been working to support.

After seeing several paraplegic patients return to the hospital after being discharge home, I noticed that many were losing hope, motivation, self-respect, and self-confidence, mainly due to a lack of financial independence.

Listening to their stories of struggle, I had a better understanding of the importance of providing hands-on skills training to boost their value for life, as well as their financial independence. But things only started to take off after I met Mr. Anil Pariyar.

Mr. Anil, a 29-year-old living with a spinal cord injury, was admitted to our hospital after falling from a tree. Prior to his accident he was a low wage worker and the sole provider for his family. After being treated in our hospital, he faced the incredibly difficult challenge of accessing his house located in a mountainous village. He was instead discharged to live with his elder sister’s family. Not only did he lose his ability to walk and live in his own home, he became financially dependent on his sister and brother-in-law.

He was very sad, worried and hopeless when I first met him. He was worried about all of the changes to his physical health which had taken a toll on his mental wellbeing. He worked with the rehabilitation team on the Neuro Rehab ward to improve his motor control, strength, endurance, and critically, his psychological, social and spiritual health.

It became clear that he would be a great fit as the first trainee in what would ultimately became the Vocational Program. He expressed an interest in learning skills to provide not only for himself, but for his mother who lives with a stroke, and his elder brother who lives with depression.

Anil’s interest in participating in vocational training was the catalyst for a conversation between the Deputy Medical Superintendent, the Rehab Supervisor, the Pastoral Care Supervisor and myself. We started with the limited materials that we had access to - paper, coloured pencils, crayons, beads and thread. Due to the global pandemic unfolding around us, we had difficulty arranging finances to buy additional supplies to progress the program such as sewing machines. In collaboration with NepalAbility, we were able to use the funds from our partnership agreement to buy the equipment. The sewing machines would be used as part of the vocational training and then gifted to trainees after completion of the program.

Our first cohort included three patients with spinal cord injuries and two stroke patients, all admitted to our Neuro Rehab ward. Participants were taught how to knit, cook and craft, to create cards and friendship bands.

​While using knitting as a creative outlet, Mr. Anil worked hard with the rehabilitaiton team. His bed mobility, weight shifting, and sitting tolerance improved with therapy sessions. He began wheelchair
and transferring training, and worked hard on skills for daily living such as transferring to the toilet. He received counseling to assist with coping and mood management.

Mr. Anil enjoyed knitting and soon showed an interest in sewing. The pandemic created challenges in obtaining and providing the sewing machines and required materials to him prior to his discharge home. We promised that he would be called back for the vocational training once the machines arrived.​

Once again, the pandemic took its tool and even after the machines and materials arrived, it took us longer than expected to resume the vocational program. Finally, in March 2021, Anil was able to participate in a one month sewing training program where he learned to measure, cut and sew clothes for kids. This included fashioning aprons, kurta surwal (loose collarless shirt worn in many regions of South Asia), shorts, long dress petticoats, skirts and more! He was also taught to sew patterns on fabrics such as table clothes and bed sheets. He used YouTube videos to advance his cutting and sewing skills. And finally, after the completion of vocational training in April 2021, he was gifted a sewing machine from NepalAbility to continue creating items to provide for himself and his family.​

Based on the passion, curiosity and dedication he showed during the training, we look forward to watching his skills continue to grow!
​
Esther is an occupational therapist working at UMH Tansen. She can be reached at: esther@regnault.org